A semi-modular analog synthesizer that makes modular synthesis more accessible and understandable than ever before.

Creating new sounds that don't exist in the outside world is an unending dream which has continued since the birth of electronic musical instruments. This dream has evolved and expanded throughout the development of new and unique music production devices.

The popularity of modular synthesizers around the world has generated new excitement and interest in the so-called "West Coast style" of synthesis that deviates from traditional synthesis norms.

The compact body of this volca synth features eight modules and 50 patch points. While learning the basics of a modular synth, you can use popular features of the volca synthesizer line to control a unique and different flavor of analog sounds.

An analog synth composed of modules

The volca modular is a semi-modular synthesizer consisting of independent analog synth modules, digital effects, and a sequencer. Each of the modules has been carefully selected for its stand-alone completeness. The modules are internally connected so that sound can be produced even before connecting the included pin cables, and the routing is shown by white lines on the panel. Module connections via a pin cable take priority over the internal connections, bypassing them.

This consists of a triangle VCO carrier and a modulator. The complex overtones generated by FM modulation are sent through a wave folder circuit to add additional overtones, producing a distinctive sound. This module is important in determining the basic character of the sound of volca modular.

This section consists of two function (envelope) generators. In addition to an ADH generator with attack, hold, and release, there's a Rise-Fall generator, also known as a slope generator, which not only applies time-varying change to the sound but also lets you patch the end trigger out back into the trigger in as a loop, making it usable as a VCO or LFO.

This is a random signal generator containing a sample & hold circuit that uses pink noise as its source. Two outputs are provided, allowing it to output either stepped or smooth random noise.

This module distributes one input to two outputs. It can also be used in the reverse direction, combining two control or audio signals into one.

This consists of two low-pass gate circuits. Typical of the West Coast style of synthesis, the module packages a filter with an amp, allowing the brightness and volume of the sound to vary together.

This is a mixing scaling module that combines two signals in various ways. It can mix not only audio signals but also control signals, as well as inverting or attenuating those signals.

This is a stereo module that applies a reverb-like effect to the audio signal.

This module is for connecting to the internal sequencer. You can set the tempo, and select different rhythm divisions to output via the gate counter.

A fusion of West Coast style in a volca format

Analog synthesizers in which a simple oscillator such as a saw wave or square wave is modified by a filter are referred to as "East Coast style" because of their origin from well-known American manufacturers. Synths of this style, as exemplified by the MS-20, have continued to evolve toward a goal of being used in many mainstream musical genres, thus being equipped with a keyboard for performance. Their sounds are notable for sharp filters and rich presence, and can be heard in many well-known songs.

Synthesizers of the "West Coast style" evolved in a uniquely different direction from such musical developments. Pursuing the freedom that is inherent to electronic musical instruments, these were based on oscillators such as FM modulation which generated numerous overtones, and used random and complex control signals and low-pass gate circuits to vary tonal character and volume, so that slight movement of a knob might dramatically transform the sound. While their potential was acknowledged, the resulting sound and its changes were difficult to predict, causing these synths to be used in a more experimental capacity.

For these reasons, hardware products of this style have been few in number. However, recent years have seen the popularity of modular synths such as Eurorack, as well as DAW plugin instruments that resurrect classic bygone synths of the past. This world-wide movement toward embracing interesting sounds has received renewed attention, spurring a new look at the sounds of this style.

Starting from analog, and freely taking in all elements including FM and PCM, the volca series has also focused on this trend. And now, this distinctive "West Coast style" sound has been added to the KORG volca series.

volca modular's modules are connected via the included pin cables, allowing a diverse range of combinations. The unit's compact chassis provides 50 patch points. Inputs and outputs are color-coded for recognition at a glance, and the signals are also marked by symbols to indicate audio, control, gate or trigger. Normally, each signal is connected according to its use, but on the volca modular, signal levels are universally compatible between modules, allowing hidden possibilities to arise from patching that defies common sense. Twenty pin cables are included, and also included is a reference sheet explaining each patch point and providing basic examples of patching. 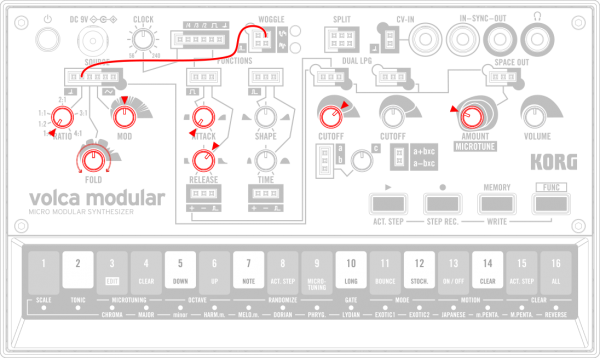 A metallic percussion sound produced by FM modulation and a wave folder. This is a basic sound of the SOURCE module. 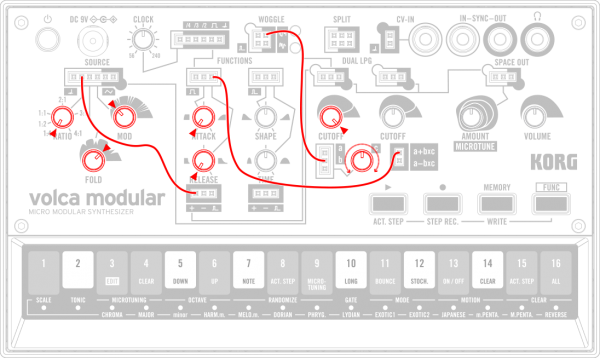 The release time of the ADH generator is varied randomly by sample & hold, applying an organic rhythm to the sequence. 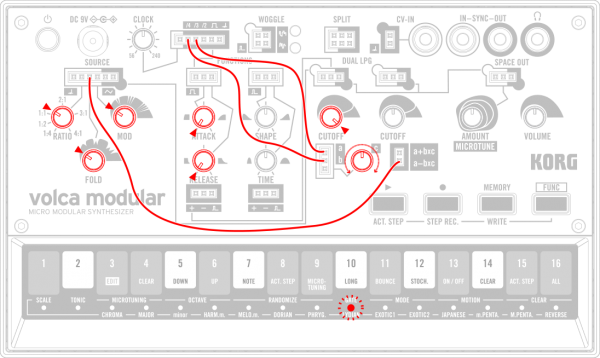 A gate counter of a different frequency is subtractively mixed. The UTILITY knob controls the amount of mix, varying the rhythm of the tonal change 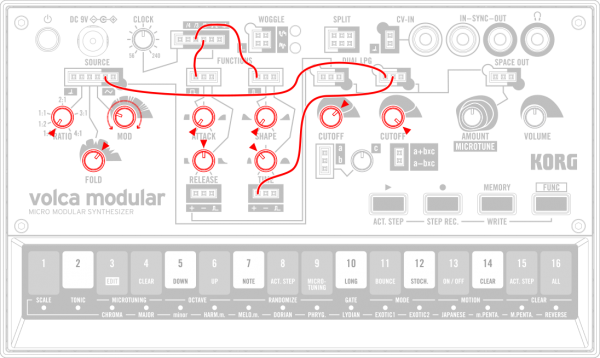 The FM modulator is obtained as triangle wave audio, and by passing it through a low-pass gate function that is separate from the carrier, two types of phrases are layered poly rhythmically. 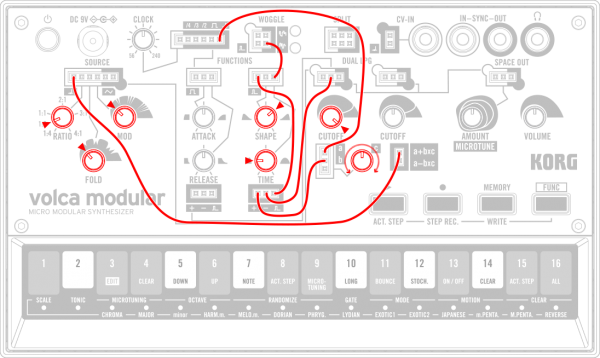 The Rise-Fall generator is looped to create an LFO which modulates the pitch and cutoff. Since the speed of the LFO itself changes irregularly, a variety of tonal characters is produced. 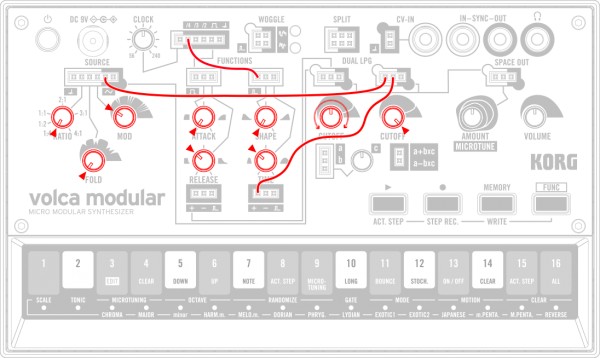 A triangle wave with lowered pitch is sounded at a low rate by the gate counter. This causes the bass to be added to the main sequence just once every four steps.

The LFO is used to minutely modulate the pitch of a triangle wave, letting you play a mellow-sounding lead that is reminiscent of solo strings. 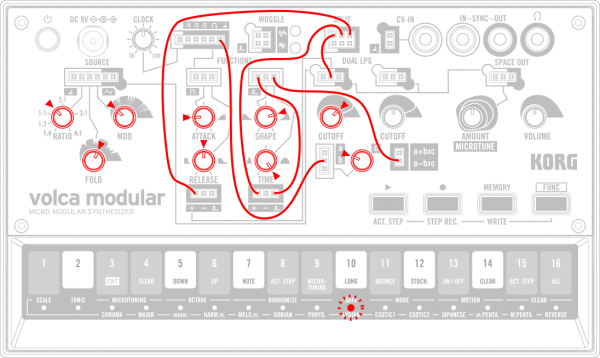 The LFO modulates the cutoff of the low-pass gate, sounding an FM bass with a sense of movement. UTILITY and SPLIT are used to slow down the LFO as the pitch becomes lower. 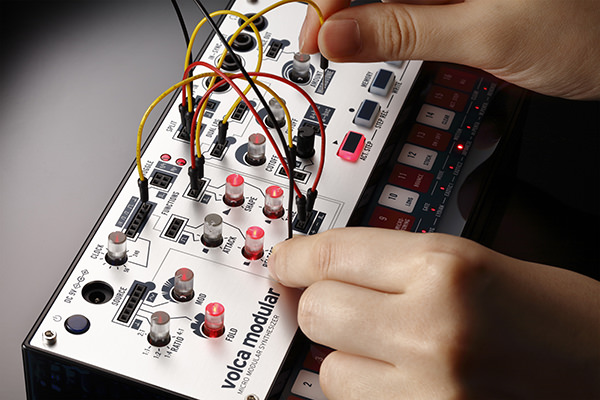 Sixteen-step sequencer that can automate parameters

While the volca modular is a semi-modular synth, it is equipped with a full-fledged 16-step sequencer providing a wide range of functions, letting you enjoy automatic performance even when used stand-alone.

Using the 16 buttons familiar from the volca series, you can perform step input or use the buttons as a keyboard for realtime recording. The pattern chaining function plays back multiple sequence patterns in succession, allowing you to connect up to 16 sequences with up to 32, 64, or even 256 steps to create large-scale development.

The motion sequence function records knob movements, letting you add time-varying change to the sound. You can create loops, or use this function live for strikingly original performances. Up to 16 sequence patterns and sounds can be saved in the unit.
Also provided is an active step function which lets you play back while skipping the steps you specify. You can skip the latter half to produce a short loop, use an alternate time signature to create polyrhythms, and evolve sequence patterns in real time to create a dynamic performance. 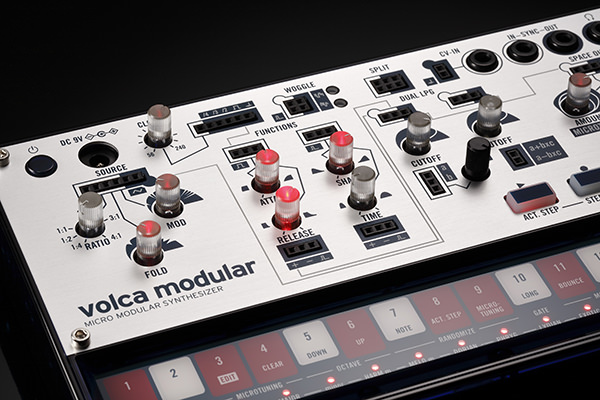 The sequencer of the volca modular lets you specify randomization for notes, active steps, and micro tuning. Irregular phrases, rhythms, and scaling that would be unlikely to come to mind can be generated by applying randomness, letting the volca be a source of unknown ideas.

Two new sequence modes have been added: bounce sequence mode which makes a round trip through the steps, and stochastic sequence mode which gradually proceeds while randomly moving forward and backward. Playing back a recorded sequence in a different form can add dramatic changes to your song or performance.

Although the volca modular is a West Coast style synthesizer, it also provides flexible support for music as a contemporary instrument. You can choose from 14 types of scale including equal temperament. Since you can also specify the tonic key from which these scales start, you can play these scales in any key.

There's also a micro tuning function that lets you individually specify the pitch of each note. You can pursue your own unique music by performing in an original tuning with the pitch of individual notes raised or lowered.

With a sync jack that allows easy connection to a Korg groove machine, you can connect the volca modular to another volca series unit, a minilogue, monologue, or prologue, an electribe, or the SQ-1, and enjoy sessions with the sequencer synchronized to the playback.

The CV IN jack for external control is a TRS mini stereo jack that lets you input two signals. The left channel can input a +-5V signal and the right channel can input a signal of 1V/oct (0-+6V) signal which is internally converted to pitch CV within the volca modular. Of course, each of these two signals can also be patched to control a module.

Compact, size, battery operation, and built-in speaker mean that you can take this unit anywhere and enjoy playing at any time. 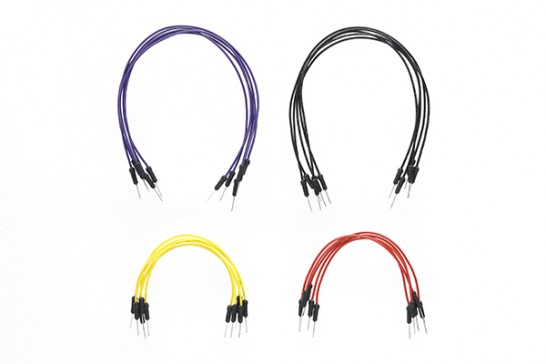 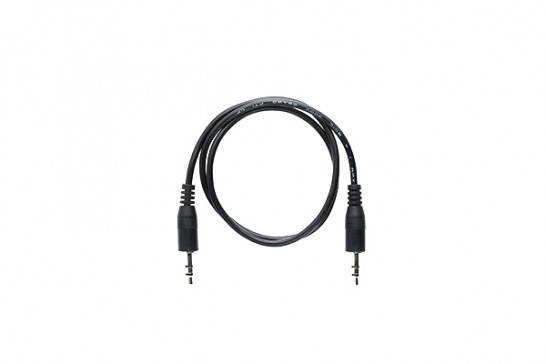 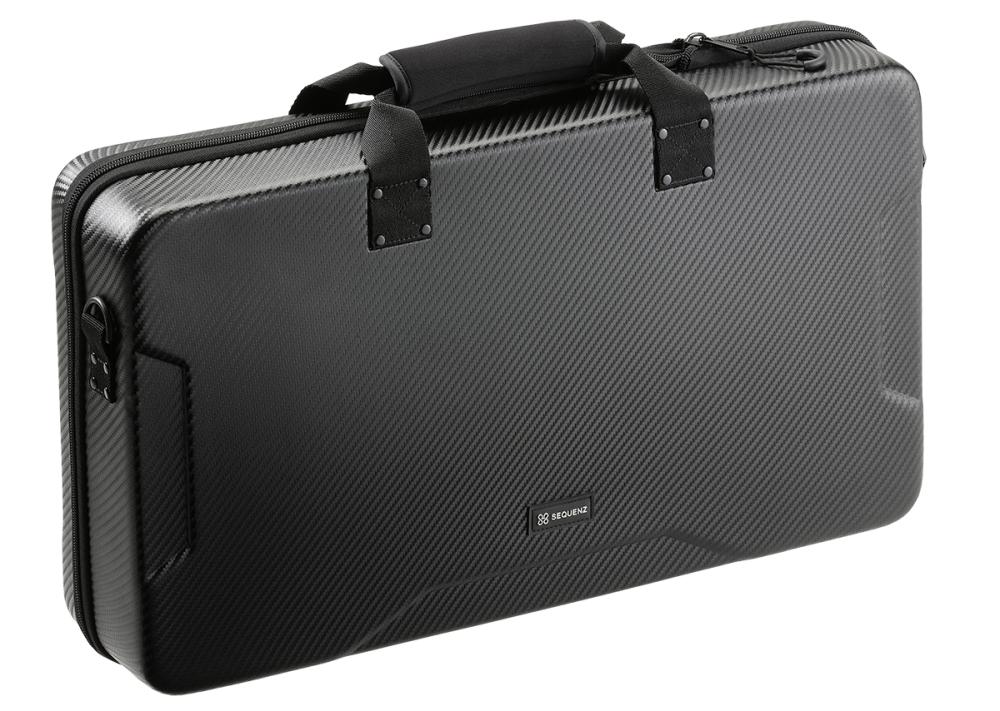 Hard-shell case for up to 4 volcas. 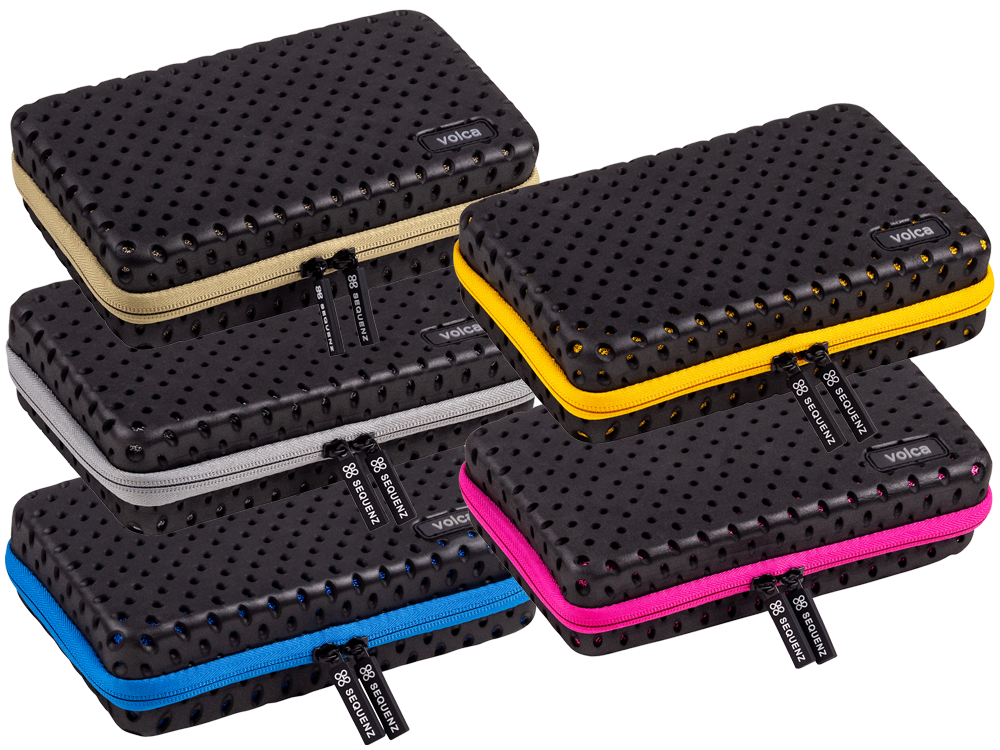 *All product, company, and standard names are trademarks or registered trademarks of their respective holders.
*Appearance and specifications of products are subject to change without notice.